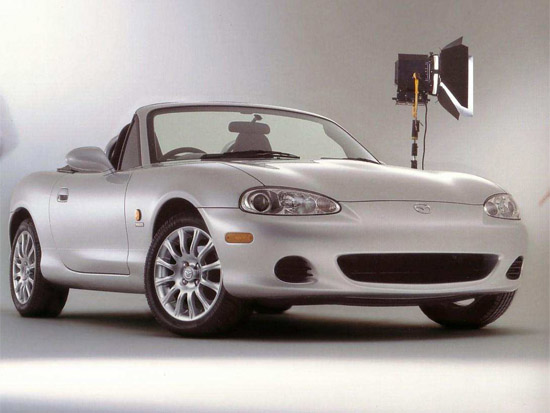 In 2001, the Mk2 was given a face lift and became known as the NB-FL, or more commonly,but most certainly unofficially, the Mk2.5. The chassis number sadly does not identify the Mk2.5 in such an obvious way, as it still has the model code NB. You could decipher it using the last 6 digits,however there is a far easier way! Although this was only a mild facelift, one of the biggest give aways is a change of headlamps (now with three separate lamp chambers) and the fact that the Mk2.5 gained holes in the lower part of the front bumper for fog lamps. Fog lamps were not standard fit on all Mk2.5\’s however where the car didn\’t have them, they were fitted with round plastic grilles to fill the hole. Rear lamps on the Mk2.5\’s were also updated with the indicator lenses going from orange on the MK2 to clear on the Mk2.5.

The different models offered for sale were a standard 1.6 or 1.8, a 1.8 automatic, and a 1.8 sport which had a six speed gear box and 16″ alloys as standard. Once again the spec improved with things like ABS, immobilisers, electric windows and seatbelt pretensioners all being fitted as standard. In October 2002, this was further enhanced with the introduction of ISO-fix child seat mounting points being added to the passenger seat, electric heated mirrors, electric aerial and a cloth soft top instead of Vinyl. The 1.8i sport gained Bilstein sports suspension and a chrome fuel filler cap, with built in sat nav being offered as an option for the first time.

As with previous models, there were a number of Mk2.5 special editions released including the Phoenix, Arizona, Montana, Nevada and Indiana (are you spotting a trend here?!). Other special editions produced included the very high spec 2002 Trilogy of which 333 were made, and signifying past, present and future, all were supplied with a solid silver keyring containing three .25 carat diamonds; the Angels, launched in 2003 was in celebration of the film Charlies Angels; and lastly in 2005 the Icon was released before production of the Mk2.5 ended.