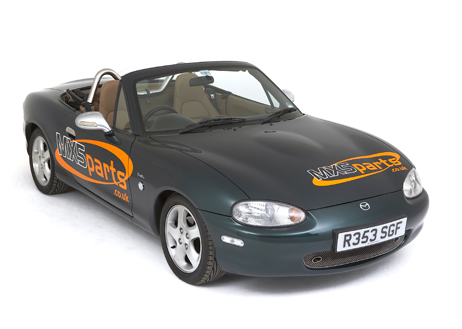 The next model in the MX5 line up is the Mk2, also known as an NB, which replaces the “NA” in the chassis number. The Mk2 was launched in 1998 (1999 in the US) the biggest change from the earlier car was the introduction of fixed oval headlamps. On the Mk2 the headlamps there are two seperate chambers within the lamp, one large one for the headlamp bulb and and a smaller for the indicator, this ran for only two years before it was face lifted. It was available with a 110bhp 1.6, or a 140 bhp 1.8 litre engine, which were essentially the same engines used in the Mk1. The Mk2 was a far higher spec than it\’s predecessor, featuring things such as power steering, glass heated rear window, airbags and remote boot opener as standard. The 1.8i version had electric windows as standard, whilst the 1.8iS gained amongst other things a Torsen limited slip diff, ABS, Nardi leather steering wheel, stainless steel scuff plates, central locking and 15″ alloy wheels.

Given the relatively short production run, there were fewer special editions produced of the Mk2. The most notable one though was the 10th Anniversary which was the first special edition produced by Mazda in Japan that was offered for sale worldwide. It was done as the name suggests, to celebrate 10 years of the MX5 and was based on the 1.8iS model which had for the first time outside of Japan, a six speed gearbox. Apart from the usual refinements you would expect, it featured “Bilstein” sports suspension, a front strut brace and highly polished, mirror finish alloy wheels. 7,000 were built, with 3700 of those being for Europe and 600 for the UK. Each car was also supplied with a gift box containing a pair of Seiko watches, a key ring, and a model of the car. These sets are highly sought after and quite valuable now as not all of them were given to customers by some European dealers!