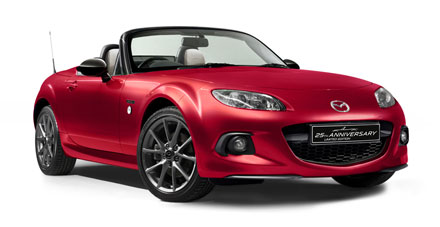 The latest incarnation of the MX-5 is a Facelift of the previous Facelift, which, for want of a better term, has become known as the Mk3.75. The most obvious tweak is to the new front bumper, which has been designed not only to look a bit fresher (and less smiley), but also to improve aerodynamics around the new squarer looking fog light and grille areas. Staying up front, it features a new active bonnet system, which lifts the trailing edge of the bonnet in the event of a pedestrian impact, allowing the MX-5 to meet future EU regulations on pedestrian safety without resorting to a raised bonnet line. Under the skin, not much has changed though, with the exception of two seemingly small changes that might make a notable difference in the way the car drives. First is a revision of the fly-by-wire throttle software, which Mazda says will improve throttle response and give more linear, nimble acceleration. In addition, Mazda have played around with the vacuum brake booster in order to improve front-rear brake load distribution, which should improve braking into bends.

Still available in the same range of engine sizes and gearbox types as the Mk3.5, the most notable model in the Mk3.75 line up is the 25th Anniversary Special Edition, which as the name suggests was launched in 2014 at the Goodwood Festival of Speed to celebrate 25 years of the MX-5. Only 750 were made available to the UK market, and although based on a standard 2.0l Sport Tech, some of the special features including Soul Red metallic paint with black 17 alloys, power roof, A-pillars and mirrors; rear diffuser; chrome exhaust tailpipes; stone coloured leather seats with the 25th Anniversary logo stitched into them; hand painted dark red dash board panel and a built in 6.1 Alpine Touchscreen sat nav system to name but a few.

Looking to buy a Mk3? Check out our handy guides: