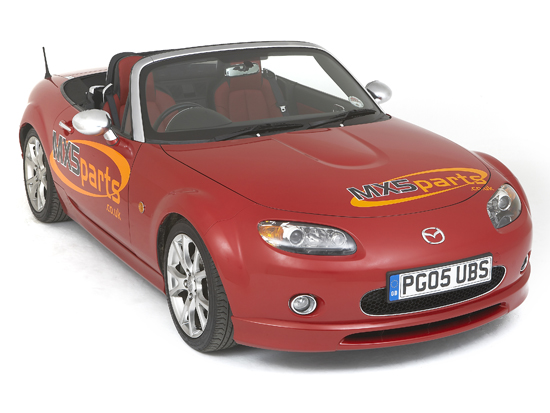 In October 2005 Mazda began production of the all new Mk3, also known as the NC. This again identifies it in the chassis number, eg: JMZ NC. Available as a 1.8, 2.0 litre or 2.0 litre Sport, the Mk3 was a complete redesign with the side repeater lamp being one of the only parts being carried over from the Mk2.5. The Mk3 is 40mm longer, 40mm wider and 15mm taller than the Mk2.5 and unmistakable in appearance. A light weight aluminium MZR engine was used, and to keep the overall weight down the Mk3 has an aluminium bonnet, boot lid and engine sub frame. Engineers even saved a few grams by making a simpler rear view mirror! At launch the 1.8L and 2.0L models were high spec with a black vinyl roof, 16″ wheels, ABS, and heated glass rear window as std. The 2.0L sport however had the lot. Six speed manual transmission, Bilstein shock absorbers, strut braces and cloth hood, with leather interior and Bose sound system being offered as an option. Later on Mazda offered the option of a power retractable hardtop for certain models.

The Mk3 began life as the 3rd Generation Limited, also known as the launch edition. This was only the second time Japan produced a special edition for worldwide sale, the first being the Mk2 10th anniversary. 3500 launch editions were produced, with 300 being allocated to the UK. Each car has a unique plaque by the gear lever stating its number. Our own car for example (pictured above) which was imported from Japan in 2005 before the car was launched in the UK, is number 807 / 3500. Based on a 2.0L sport model, there are many additional features that identify it as a launch edition. The Velocity Red Mica paint; the chrome windscreen surround, door handle covers, fog light surrounds and grille surround; special 17″ alloys and a seven speaker Bose stereo system. Further special editions followed such as the Z-Sport and Icon in 2007, and the Niseko in 2008.

Looking to buy a Mk3? Check out our handy guides: