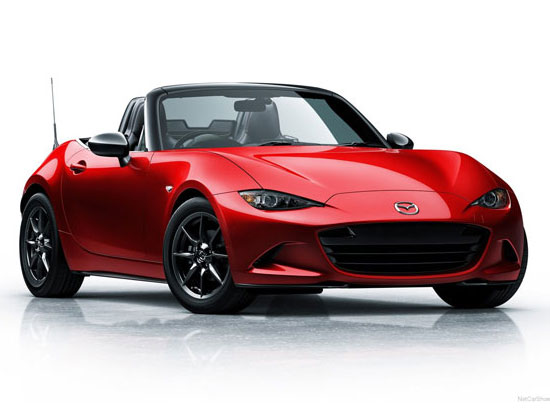 The worlds most popular roadster, the MX-5 has a whole new look. After 25 years and over 947,00 sales worldwide, the new fourth-generation 2015 Mazda MX-5 has finally been revealed. The new Mk4 MX-5 roadster is shorter, lower and wider than the current model, and the new drop top has shed over 100kg in weight.Unveiled at synchronized events in Spain, Japan and North America, the new MX-5 has been penned using the same Kodo design language as both the Mazda 3 and Mazda 6. Unlike the saloons, which have softer lines, the MX-5 has an added depth of aggression, with sharp cascading lines and flared panels. Narrow LED headlights rest under pronounced front haunches, while deep-set daytime running lights give the car a prominent front end.

The latest iteration of the MX-5 bucks the trend of new models gaining ever-increasing proportions. In comparison to the past three generations, this latest MX-5 has the smallest footprint of the lot, measuring in at 105mm shorter, 20mm lower but 10mm wider than the outgoing model. The wheelbase has also been reduced by 15mm, as well as front and rear overhangs cut by 90mm.

The cabin is a more familiar story. Most features and tech have been lifted straight from the Mazda 3, so the floating infotainment system and swivel wheel control are nothing new, but its still a beautifully finished and driver-focused cabin. The bonnet has been lowered, and the A-pillars and windscreen have been moved rearward and made thinner to give a better view of the road ahead. Headrest speakers are a new feature, however

Underpinning the new Mk4 MX-5 roadster is a whole host of new SKYACTIV technology, which was revealed at the New York Motor Show. The backbone of the new model is a lightweight SKYACTIV-chassis which contributes considerably to the 100kg weight saving.

Soft-top models weigh less than 1,050kg and the new running gear has also allowed Mazda to position the engine behind the front axle and closer to the cars centre than ever before. All of these factors lower the centre and gravity, which improve handling.

Engines options are 1.5-litre and 2.0-litre petrol engines featuring the latest SKYACTIV technology which develops around 130bhp and 165bhp respectively. It comes with a six-speed manual gearbox fitted as standard, an automatic gearbox is available as an option.
Following its debut at the Paris Motor Show, the new Mk4 MX-5 roadster went on sale in the UK in September 2015. The current entry-level price of a convertible Mk4 is £18,495.

2017 sees the launch of the new Mk4 model known as the RF, or Retractable Fastback. The RF, which was first revealed at the New York Motor Show, follows the previous-generation Mazda MX-5 folding hardtop version, which accounted for up to 80% of all MX-5s sold by the time the Mk3 edition of the car was phased out in 2014. However, it takes a more radical approach than its predecessor, with a complex mechanism thats similar in principle to the set-up used by Porsche on the latest 911 Targa.

Mazdas designers have created new bodywork, which joins the central roof panel to the boot deck, giving the RF different side and rear profiles to the regular car. A switch on the dashboard operates electric motors, which lift a section of rear bodywork up as a single piece, allowing the car to tuck away the central roof section. The process takes around 12 seconds, and it can happen at speeds of up to 6mph. Prices will start in the UK from around £22,195 for a entry level model.

Looking to buy a Mk4? Check out our handy guides: